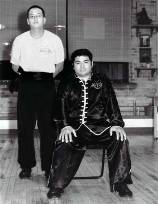 Michael first began learning Northern Shaolin Seven-Star Praying Mantis Kung Fu from Master Yamel Torres when he moved to Chicago, Illinois. He was intrigued and fascinated by martial arts from an early age and recalls that his paternal grandfather would even attempt to teach him portions of a tai chi chuan straight sword form whenever he came to visit the United States. However, tai chi chuan proved difficult to teach an impatient young boy. Although Michael would explore several different forms of martial arts during his childhood, he was always searching for something more.

It was not until Michael met Master Torres did his life become permanently intertwined with Chinese martial arts. Michael was one of Master Torres’ first students when he was teaching on North Ravenswood Avenue in Chicago. Years later, he was also the first student to be given permission by Master Torres to teach and propagate the art as it was passed down to him by his teacher, Master Raymond Ly (Ming Loy).

Sifu Wang has had the honor of learning from Master Ly before his too-soon passing in November 2002. He has also had the opportunity to learn from Master Ly’s kung fu brother Lee Kam Wing, when Master Lee visited Chicago from Hong Kong.

Sifu Wang has also traveled with Master Torres to Shanghai in order to study and train with associates in China. He has also won various accolades, including gold medals for forms and sparring at the 2004 Great Lakes Kung Fu Championships. 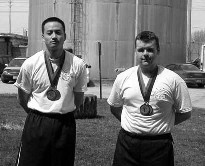 Sifu Wang has been a student of Chinese martial and healing arts for over 25 years and has been teaching kung fu, tai chi and qigong at his studio in Boulder, Colorado since 2007. He continues to study privately with Master Torres.

His martial arts training has also led him to explore various healing modalities, including acupuncture, massage and herbs. They are two sides of the same coin in the Chinese framework for health and wellness. His teachings also have a focus on health and healing, energy management, and inviting more presence into our lives.

Sifu Wang enjoys getting to know each of his students and invites all prospective students to contact him to discuss whether the Boulder Kung Fu Academy is a good fit for their individual martial arts training objectives.